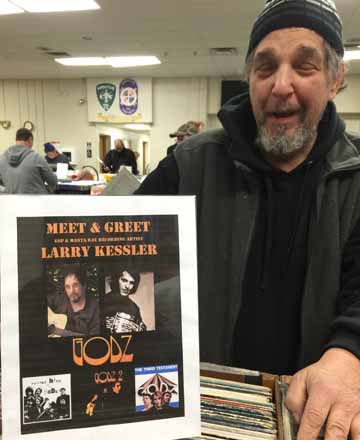 Join us for another great show during Valentine’s weekend for more musical deals on February 15. It’s never to late to find a gift for that special someone!

The first show of 2015 was a great success with many diverse vendors and collectors enjoying the day. Larry Kessler of the underground psychedelic rock band GODZ joined us for the first time (interview coming soon). Laura Kooyman of reinKarnations brought her clever, re-imagined vinyl and record creations back to the show and Jay Monroe of R&B Tees came with his wonderful T-shirt selection. He will be back for our February show! We also spotted some collectibles with great graphics. Did you know that Bing Crosby was the rock star of his day? And for a few hundred dollars, you can own a rare original Beatles’ Yellow Submarine lunchbox? See you February 15!

Laura Kooyman of reinKarnations with Janet.

1 thought on “Love is all around! Join us Valentine’s Weekend, February 15 for our next show!”