After the August hiatus, the September show was a great kick-off to the remainder of the 2014 season. There were brand new vendors and legendary record collectors/sellers from across the pond and Europe. More on that story coming up! You never know what surprises – and people you will find at the Arbutus Record Show. Before cheering on our home team, there is plenty of time to come to the show. Admission and parking is always FREE and the hours are 9 am to 3 pm. See you there and wear your Purple Pride! 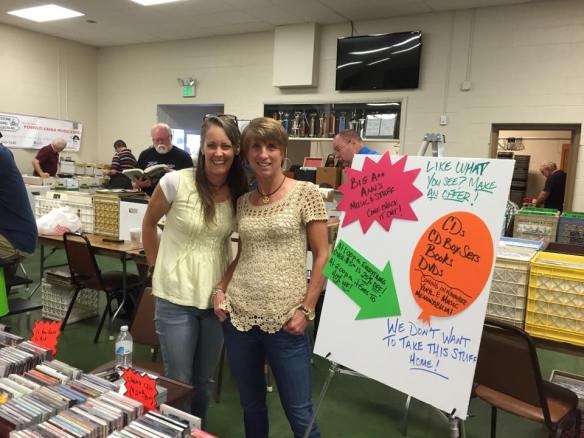 First time vendors Ann and her friend Preston had attendees – and longtime veterans and fellow vendors – hopping around their table snatching up great deals on CDs and CD collections. They will be returning for our November 16th show!

An amazing story unfolded at the show with the participation of a celebrity. A tall, lanky Scotsman with an easy laugh and full of great stories, John Anderson (left) is a  legend in the world of music and record collecting. Ted, an out-of-town vender from Georgia (pictured right) couldn’t say enough about him.

As a young man, John was one of the first people from the UK who started to make trips to the East Coast of the U.S. in the late 60s to find 45s that would fuel the “Northern Soul” movement – a term coined by British journalist Dave Godin. The movement was characterized by a music and style of dance that developed in industrialized northern England and came from the working class and “Mod” youth culture. It began with the upbeat Motown sound of the mid-60s, but then gravitated to the music of lesser-known, American black soul artists on smaller labels as music tastes changed. Northern Soul was at its peak throughout the 70s as venues would host all-night, soul dance parties that still played mid-60s soul. It is still popular today and the subject of a 2014 BBC documentary, “Northern Soul: Living for the Weekend.” (click on title to view on YouTube.)

Anderson travelled to towns big and small in the US and paid as little as a pound or 50 pence a piece for these rare records. British DJs and music lovers could not wait for John to bring back his latest finds. He sold the music to fans through his business, “Soul Bowl,” and become a premier expert and supplier of rare American soul music to the UK and beyond.

John is still making trips to the U.S. and this time he came with other European collector friends – Richard, Angus, and Thorsten who has a record shop in Germany and his buddy Marcel from Belgium, an avid collector. It was quite an international gathering at the show that day and we were so honored to have John and all these gentleman with us!